The Greeks: Crucible of Civilization 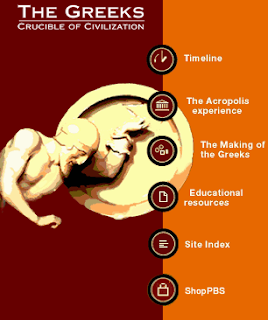 This engaging PBS educational companion site examines Ancient Greece's Classical Period principally though a series of essays on four principal characters: Cleisthenes, Themistocles, Pericles, Socrates, and Aspasia. Each character is introduced via a video clip from the series. There are also a series of background pages on Greek culture, Greek warfare, Greek architecture, and other people and places in Greek history. Animation and simulations play an important role on the site. For instance, there is a 3D animation of the Parthenon, an interactive Greek timeline, an interactive Greek map, and audio to help you "speak like a Greek." In the Education Resources section is a multidisciplinary unit that uses television, the Internet, and other resources to explore Ancient Greece. All in all, this is an excellent introduction to Ancient Greece for students.