In this web page http://www.teachersdomain.org/ you can find videos, and materials for any subject, but it is specially interesting for sciences or technology (materials, structures, electricity... you can find many related videos).
You need to sign-up first, and then you will have access to 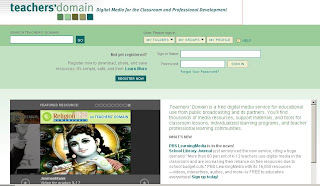 all the resources and materials.
Publicado por Antònia Vidal en 4:42 No hay comentarios:

Telmo and Tula are going to teach us how to prepare a delicious breakfast: Muesli.

Exercise 1: What ingredients DON'T you need for the Muesli?

Chocolate
Fruit of your choice


Exercise 2: Put the instructions to make the Muesli in the correct order.

a) Add one spoonful of honey to the orange juice and mix it up until it blends.
b) First you put the peeled and sliced apples into the bowl.
c) Have a nice breakfast!
d) Pour the juice into the bowl and go get the nuts.
e) Then you add the raisins.
f) Squezze the orange with the manual squeezer and put the juice into a glass.
g) Now drop the yoghurts and finally the rolled oats.

If you want to learn more recipes click on Telmo and Tula below:

Jason Mraz was born on the 23rd of June 1977. He is an American singer and song-writer, born and raised in Mechanicsville, Virginia. His stylistic influences include reggae, pop, rock, folk, jazz, and hip hop.
Mraz released his debut album, Waiting for My Rocket to Come in 2002 but it was not until the release of his second album, Mr. A-Z that Mraz achieved commercial success.

Colbie Caillat /ˈkoʊlbi kəˈleɪ/ (born May 28, 1985 in Newbury Park, California) is an American pop singer-songwriter and guitarist from Malibu, California.


In May 2008, Colbie and Jason recorded the following duet "Lucky."

1) Put the a-h lines in the correct order and fill in the blanks while listening to the song:

a) I'm talking to you
b) Under the open sky, oh my, baby I'm trying
c) Boy I hear you in my dreams
d) You make it easier when life gets hard
e) I feel your whisper across the sea
f) Across the water across the deep blue ocean
g) I keep you with me in my heart
h) Do you hear me

1) Watch the following commercial about good sportsmanship and match the sentences below in the correct order according to the video below:

…or how many touchdowns you can score that matters, it’s really how you play the game that counts, because…

… the game only lasts…

Here you are some web sites with games for improving their knowledge about the Solar System:

Click on this link to access an online magazine with excellent resources for teachers.
Publicado por Ana Garcia Hermoso en 4:11 No hay comentarios:

“If we could see the effect we’re having on our planet, we would do something about it.”

Talk about it with the whole class.

The tool is easy to use, made even easier with the Book Cover Planning Sheets, printable PDFs that students can use to draft and revise their work before creating and printing their final book covers or dust jackets.

How to write an essay in history exams .

The tool is easy to use, made even easier with the Comic Strip Planning Sheet, a printable PDF that comic creators can use to draft and revise their work before creating and printing their final comics. After completing their comic, students have the ability to print out and illustrate their final versions for feedback and assessment.

Enviar por correo electrónicoEscribe un blogCompartir con TwitterCompartir con FacebookCompartir en Pinterest
Etiquetas: 4ESO, arts
This is the presentation I use for Quizzes. They can be good fun! Plus, you get necessary feedback...
Quiz2

LITERACY:POETIC LANGUAGE
TED HUGHES
Ted Hughes is one of the most renowned poets of thelast century in England. Besides his tormented relationshiop with Sylvia Plath, and his poetic work, he wrote some books for children using a seeply poetic beautiful language.
These stories are approachable tales for our students, where literary devices can be found and studied. From all these books,the one I recommend for 1 ESO is The Iron Man. There are many activities that can be found on the internet to work with this book, as well as a movie called The Iron Giant.
Even though the stories are really simple, the book can be used in higher years, like 2 and 3 ESO inorder to analyze poetic language

This is the web page where Ted Hughes' childrenbook can be bought and downloaded:

This is the beginning of the book:

"The Coming of the Iron Man
The Iron Man came to the top of the cliff.
How far had he walked? Nobody knows.
Where had he come from? Nobody knows. How was he made? Nobody knows.
Taller than a house, the Iron Man stood at the top of the cliff, on the very brink, in the darkness.
The wind sang through his iron fingers. His great iron head, shaped like a dustbin but as big as a bedroom, slowly
turned to the right, slowly turned to the left. His iron ears turned, this way, that way. He was hearing the sea. His
eyes, like headlamps, glowed white, then red, then infrared, searching the sea. Never before had the Iron Man
seen the sea.
He swayed in the strong wind that pressed against his back. He swayed forward, on the brink of the high cliff.
And his right foot, his enormous iron right foot, lifted—up, out, into space, and the Iron Man stepped
forward, off the cliff, into nothingness.
CRRRAAAASSSSSSH!
Down the cliff the Iron Man came toppling, head over heels.
CRASH!
CRASH!
CRASH!
From rock to rock, snag to snag, tumbling slowly.And as he crashed and crashed and crashed.
His iron legs fell off.
His iron arms broke off, and the hands broke off the arms.
His great iron ears fell off and his eyes fell out.
His great iron head fell off.
All the separate pieces tumbled, scattered, crashing, bumping, clanging, down on to the rocky beach far below.
A few rocks tumbled with him.
Then
Silence.
Only the sound of the sea, chewing away at the edge of the rocky beach, where the bits and pieces of the
Iron Man lay scattered far and wide, silent and unmoving."
The Iron Man by Ted Hughes


Some lesson plans and activities to work with this book can be found on the following web pages:

http://education.scholastic.co.uk/content/2911 (a poem based on the story)

This website contains an excellent revision on landscapes:
http://www.bbc.co.uk/schools/gcsebitesize/geography/water_rivers/